inside out youth services 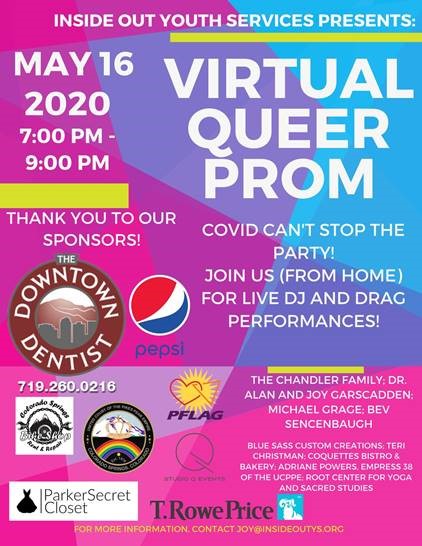 Who’s ready to get down at (virtual) Queer Prom?!? COVID can’t stop this party, so we’re bringing it to your living room with a live DJ and the drag performers you know and love. Thanks to a generous sponsorship from The Downtown Dentist, it is free of charge and all ages are welcome! Stay tuned to social media and our website for links and more information…

The United Court of the Pikes Peak Empire and Inside Out Youth Services present: Youth Line Pageant!

A pageant where 2 youth will be chosen as Youth Emperor, Empress or Emprex of the United Court of the Pikes Peak Empire. These youth would get the chance to follow and learn from Emperor 44 Nic and Empress 44 Autumn Quinn. They also would get to choose their own Prince, Princess or Princessex.