This page was most recently updated on June 19th, 2021

Coronation used to be in June. Investitures was scheduled to be held in the mountains about one month later. See Article X with Cliff May’s proclamation. The PR’s originally were in charge of putting together this event.

See Empress V, Lady Bubbles’ proclamation. She gave the PR’s an event that honored them the eve of Investitures. For many years, this was a tradition for PR Ball. Several other Courts also schedule their PR Ball up to 45 days after Coronation.

PR Ball was where the funds from the previous reign were dispersed. Later, as Winter Cotillion moved, so did the Presentation of the Funds.

PR Ball was it’s own State Function that celebrated their work throughout the year. Over time the PR’s became in charge of acclimating the new Monarchs to their new year. 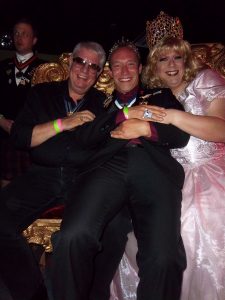 During Reign XXVI, the PR’s opted to have their step down be during Coronation. PR Ball had been held at hotels, and the economy was starting to decline. PR Ball grew less cost-effective than in the past. The PR’s were added to the stepping down pin for the first time ever. Then, in Reign XXIX, the PR’s were added again to the pin, and the process became a new tradition.

PR Ball became PR Function, held about 45 days before Coronation. There was a lot of debate if it was still to be a State Function. PR Function was held at different bars and was able to become profitable for the community.

During Reigns XXXV and XXXVI, PR Function was an object of debate again. Our Mother Court, the Imperial Court of the Rocky Mountain Empire, had just recently changed their PR Ball to occur Coronation weekend. PR Function was still organized as a ball, just like Winter Cotillion and Black and White Ball. Since the economy during the Reigns had been declining, most of the state functions were held in bars that could accommodate the number of guests.

PR Function became the start of the Campaign Season for the upcoming reign. This is the first major event for the Candidates to participate. In the past, the mandatory Candidate event, Aspen Run was held the Sunday afterwards. Because Coronation is November, now, and PR Function has been held in September, the Campaign Season is conveniently given regal bookends.

There were so many questions about the relevance of the title of PR Ball versus PR Function. Finally, during a General Membership meeting during Reign XXXVII, PR Function was officially named PR Ball again. The PR’s were still to step down with the Emperor and Empress as well as the names of the PR’s on the stepping down pins. The PR’s are given one command performance each during Coronation as well.

Out of all the State Functions, PR Ball has evolved the most. 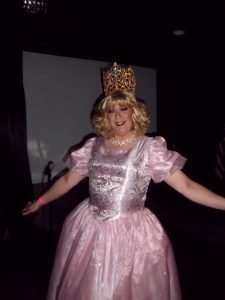 The Prince and Princess Royal

Emperor Emeritus II, Cliff May, proclamated the roles and the Prince and Princess Royal. The PR’s were to create Investitures, to be organized somewhere in the mountains no later than 45 days after Coronation. He also said that their reign was to be between each Investitures ceremony. Emperor Emeritus III, Jim Brazell, proclamated the reign of the Prince and Princess, giving more detail to the roles.

The Prince and Princess are at the behest of the Emperor and Empress. Traditionally, the PR’s do not command the rest of the line. Emperor Emeritus XI, Duane Thompson, proclamated the positions of Crown Prince and Crown Princess who are charged with helping the PR’s with PR Ball, along with other responsibilities.

Get your tickets below: