This page was most recently updated by the webmaster on May 25th, 2020

The United Court of the Pikes Peak Empire

The oldest GLBT organization in Southern Colorado – The Highest Court in all the Land!

The United Court of the Pikes Peak Empire conducts charitable and public service projects and events to benefit legitimate charities, and we provide social and charitable activities for the benefit of the gay, lesbian, bisexual, and transgender community.

We are a 501(c)3 organization and your donations are tax deductible.

Click on the buttons below to find out more about the United Court of the Pikes Peak Empire:

State of the Reign Report – Autumn discussed past recent virtual events. Plans for future events during social distancing are in the works. Nic discussed possible candidates for the position of Correspondence Secretary. Concerns on the lack of involvement from Board Members and the support of the members of the UCPPE were discussed. Brainstorming ideas to implement safety measures and practices for future interaction in public venues.

State of the Regents Report – Sable Gordon discussed fund raising opportunities. Plans for Aspen Brunch is suspended until further notice. Tentative date for a Regents meeting (possibly virtual) for August 16th. The potential for the current Reign to continue for another year was suggested, further discussion to be held during the Regents meeting.

Old Business – Discussion of membership list and reaching out to current members as well as conducting a membership drive. Policy Manual, By Law and Donation Letter has been updated and posted. In need of a new Games Manager. The use of Google Suite for sharing and uploading files are in plans and will be further discussed and announced in the future. For Denver Pride Virtual, UCCPE will have advertisement and will have a booth set for year 2021. President will be sending the Vice President all items necessary to conduct duties.

New Business – Discussion of action plans for the needs of care packages again for the COVID-19 were discussed and tabled for the next meeting. Plans for possibly conducting a care drive for residents at the Nursing home were discussed. Nic motioned to grant Lauren Ashley in favor of a waiver to be eligible for cadency for future positions after submitting her resignation from Games Manager, Carrol second, discussion was held, voting tabled pending Lauren’s response to give a detailed reason in support of the letter she provided and if she wants a waiver. Participation and involvement from the BOA were discussed. Details for Black and White Ball to be determined, but still scheduled to be conducted. Adam motioned to grant Penni Cillen a one

time $100 for art supplies for a reoccurring show she has been conducting, Autumn second, discussion was held, with 5 in favor, 1 oppose, and 2 abstention motion passed.

Work with Public relations chair on flyers for Membership drive,

Promote and execute the membership drive

Google Suites set up and review with Water and the BOA.

Information will be forth coming from Pridefest planning committee

Carrol will get the contact information for a nursing home to Sable.

Sean will revise the donation letter as a request for what will bring joy.

Autumn will do flyers for both fundraising and distribution.

BOA Positions: We need a gaming manager. Water will reach out to Anka and Loren regarding their status / resignation.

With no further business to discuss, next Virtual BOA meeting is set for June 20th, at 12:00pm. Link to virtual meeting will be announced.

April 16th 2020, United Court Pikes Peak Empire Board of Advisors meeting (Virtual)
BOA and members present: Water Xaris – President; Vice President – Adam Martinez; Mesha Narie Fierce – Recording Secretary; Carroll Hillebrand – Treasurer; Sean Andrews – Public Relations; Member at Large – Lauren Ashley; Empress 44; Nic Grzecka – Emperor 44
Call to order: 12:15pm; Water Xaris, President, presided the meeting.
President Report- No significant activity to report
Vice President Report – N/A
Secretary Report – No significant activity to report
Treasurer Report – Carroll presented details on finances and the checks and balances. Nic motioned to accept report, Sean second, with 5 in favor, 1 abstention, motion passed.
Committee Report – No significant activities to report.
State of the Reign Report – Nic discussed past events. Upcoming events are to be announced with details as the event approaches due to the COVID-19. Ideas and plans for a Drive thru BBQ are forthcoming. Nic motioned to allocate up to $1000.00 for care packages – COVID-19 Care Kit Readiness, that will have essential needs and a committee of volunteers to put together and handout by May 3rd, Sean second, discussion held, with all in favor, motion passed.
State of the Regents Report – No member present to report.
Old Business – Discussion of the vacancy for Vice-President, Adam Martinez (Connie) was interviewed for the position. After interview, Adam was nominated for candidacy for Vice President. With 6 in favor, 1 abstention, Adam Martinez was voted for the position of Vice President.
New Business – No business to discuss
With no further business to discuss, next Virtual BOA meeting is set for May 17th, at 12:00pm. Link to virtual meeting will be announced.
Meeting adjourned at 1:34pm.
… Read More

March 15th 2020, United Court Pikes Peak Empire Board of Advisors meeting
BOA and members present: Water Xaris – President; Mesha Narie Fierce – Recording Secretary; Carroll Hillebrand – Treasurer; Sean Andrews – Public Relations; Sable Gordon – Co-Counsel; Autumn Quinn – Empress 44; Nic Grzecka – Emperor 44; Draken – member
Call to order: 12:22pm; Water Xaris, President, presided the meeting.
President Report- No significant activity to report
Vice President Report – N/A
Secretary Report – No significant activity to report
Treasurer Report – Carroll presented details on finances and funds. Nic motioned to accept report, Mesha second, with all in favor, motion passed.
Committee Report – No significant activities to report.
State of the Reign Report – Nic and Autumn discussed past and upcoming events. With the recent decisions from the Board of Directors for the ICRME, Nic and Autumn question their attendance to ICRME Coronation. The UCPPE BOA have decided to write a letter to the ICRME BOD detailing key concerns and will attend Coronation per guidance of By Laws.
State of the Regents Report – Regent’s meeting will be September 13, 2020 at Club Q at 10:00am followed by the Aspen Brunch at Club Q at 12:00pm.
Old Business – Discussion of the vacancy for Vice-President, anyone interested in the VP vacancy should attend the April meeting; Policy Manual and By Laws updates; In Person Games Manager Training has been canceled for the near future. All online classes are recommended. Water will keep everyone updated on changes. Denver Pride Booth application is being submitted.
New Business – Water presented safety tips for the CoronoVirus. Carroll suggested to purchase a shed for the material and equipment to save money on storage, which would be stored at Club Q. Sable also suggested to store the items at her home. Further discussion will be held with the Regents.
Educational Segment – Water discussed possible guest speakers for future BOA meetings. The history of the Black and White Ball will be presented at April’s BOA meeting.
With no further business to discuss, next BOA meeting is set for April 19th, at 12 noon, at the Engel and Volkers office
Meeting adjourned at 2:03pm.
… Read More 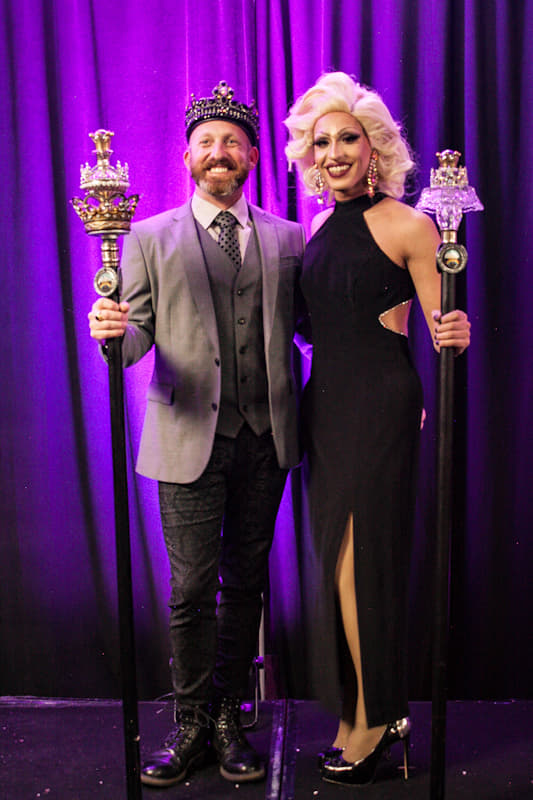 Save Me Scout Rescue

One Nation Walking Together

Our Monarchs and line members work to raise money through donations at our performances. The money we raise is then given back to the community at the end of each year. We get all our money from the generosity of those who attend our shows and donate. Come join us at our next event to see more about what we do, and help us to help those in our community, one dollar at a time.

* The actual amount raised was higher than this.  We are gathering the figures for disbursements that were given out at times other than Winter Cotillion.

Sean Gooden President of the Board of Advisors

Organizations For Which We Raise Money:

Bars That Help Us Raise Money

Business and Organizations that Support Us

The Imperial Court of the Rocky Mountain Empire
Denver, Colorado

The United Court of the Sandias, Inc.