This page was most recently updated by the webmaster on July 26th, 2021

What is Coronation and how did it begin?

Coronation is the last event to be held during the Imperial year. It celebrates the beginning of UCPPE. The Monarchs have worked hard all year, and they step down with their friends and family from all over the Imperial Court System. UCPPE celebrates an entire weekend of events.

Coronation Weekend also starts the new year for the next Reign. The newly elected Monarchs are brought into the ballroom and crowned at the end of the event. This next coronation will crown the new Emperor/Empress/Emprx XLVI (46).

In prior years, Coronation was scheduled in June. The cost to host Coronation in June became increasingly expensive due to the popularity of the summer months, therefore Coronation was moved to November.

Coronation is a chance for the current reigning Monarchs to honor their friends that have been inspirational throughout the year with a special request of a command performance. Command Performers get the opportunity to perform at different parts of the evening on Coronation Night. Since Reign XXXI, the UCPPE allows for only ten command performers to have appropriate time management throughout the event.

Coronation is an event where the community is presented the results from Voting Day. At the end of the night, results are presented for the new members of the Board of Advisors in the at-large role, as well as the new reigning Emperor/Empress/Emprx.

Usually, the Thursday before Coronation, the In-Town Show is chance for the Monarchs to honor all the people who helped the reign hold success over the year. Awards and Certificates are given to In-Town Regents and Line Members.

Out Town Show and Bus Tour

Coronation starts at 5:00pm. Colorado Springs has prided itself on hosting a buffet dinner where guests start eating an hour before the event starts. After the traditional opening ceremonies, guests are welcome to continue eating from the buffet until the end of second set. The Guests will see talented Command Performers, witness the majesty of In-Town and Out-of-Town walks of Regents, Businesses and Organizations. The Monarchs give out Lifetime Awards and have one last evening sitting on the Imperial thrones. The newly elected Monarchs are crowned at the end of the event.

Victory Brunch is the Sunday afterwards. We invite guests to attend a buffet. The event is designed to be both comfortable as well as elegant. The stepping down Monarchs give out more awards to in-town and out-of-town guests. The newly elected Monarchs are given a chance to welcome their new Reign. They announce their reign theme, colors, and the theme and date of their stepping down Coronation. During Victory Brunch the Emperor/Empress/Emprx of the reign also dub their new Prince/Princess/Princet Royal.

UCPPE Coronation 46 “A Night Under the Big Top”

Individuals representing Courts, Businesses or Organizations are encouraged to walk. Groups with five (5) or more representatives are invited to do an entrance limited to a maximum of five (5) minutes. Performances are limited to seven (7) minutes. Appropriate formal or themed attire and regalia is requested for everyone on the stage for crowning ceremony. Appropriate content: no confetti, no glitter, nudity, open flames, live animals, bare breasts, or exposed buttocks.

Hospitality plans to be announced shortly.

We will reserve entire tables with full pre-payment for (8) eight seats. Prepaid tickets will be held at the Hospitality Suite or at the door at Coronation.
No refunds will be made.

FLY INTO COLORADO SPRINGS!
OUR AIRPORT CODE IS COS.

In-Town Protocol will be collected by the Vice President of the Board. (2nd floor) on 8 ½ x 11 paper. Accepted from 10:00am—1:00pm. Protocol should be typed.
There is a computer center on the first floor of the hotel. Please spell difficult words or names phonetically. All Protocol can also be emailed to vicepresident@ucppe.org .

We invite everyone to place an ad in our Coronation 46 Program. The deadline for placing an ad is October 16, 2021. All ads should be camera-ready art, digital format. Leave a 1/4” border around each of the four edges of a full 8 1/2” x 11” page. Ensure ad is in either jpg, or png format.

Please send payment with Ad. Court checks, money orders or cashier’s checks accepted. Remit in United States Currency.
Checks should be made out to:
The United Court of the
Pikes Peak Empire
Include Ad payment to:

2 Page $200
Ads will not be printed until payment has been received.

You may also purchase your ad online via our secure server and upload your content via our upload page:

If you order your ad online via our secure server, don’t forget to upload your ad copy via the Upload page. Remember that Regents of the Court receive 50% discount on their ads placed, contact webmaster@ucppe.org for the coupon code. 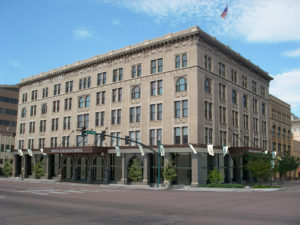 With towering granite walls crowned by elaborate embellishment, our boutique hotel is a superb fusion of historic architecture and contemporary accommodations. Built in 1902 as a stock exchange for local mining companies, The Mining Exchange, A Wyndham Grand Hotel & Spa offers a one-of-a-kind experience in the heart of downtown Colorado Springs. You’ll love our elegant, yet casual public spaces and the beautiful lobby featuring an Italian marble fireplace and antique piano. We also offer unique event spaces for everything from meetings and conferences to weddings and special celebrations.

Throughout your stay, enjoy delicious cuisine at our Springs Orleans Restaurant and relax with a signature cocktail at one of our two bars. You can also spend time unwinding in the luxurious MX Spa and working out at the state-of-the-art fitness center. Or, step out to explore nearby Pikes Peak, Garden of the Gods, or the area’s plethora of dining and shopping. At the end of your day, get the perfect night’s rest in one of the comfortable guest rooms appointed with plush bedding, custom artwork, and thoughtful amenities.

The reservation link for Coronation 2021 that can be utilized to reserve a room directly underneath the block with our negotiated rate. Please note that all room types that have been contracted are currently available and will be reserved on a first come – first serve basis.

Guests may also reach out to Alysse (A-lease) Barfell, Reservations Coordinator, to reserve your room. She can be reached at 719-323-2002. Please note her hours are from 9:00am – 5:00pm MDT, Monday through Friday. If you try to reach her outside those days/hours you will be directed to The Mining Exchange central reservations line where you will also be able to reserve your room. You will need to reference to the group block CORONATION to receive the group rate. 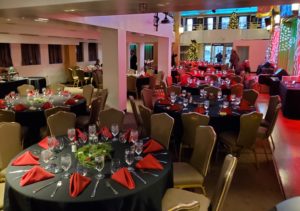 The Gold Room is a live entertainment venue in Colorado Springs, CO. It is housed in a fabulous 1933, art deco building, which has been retrofitted as a state-of-the-art live performance hall. The wrap around balcony creates an intimate setting to watch everything from live music to comedy. Hold your own special event that drops you into that Great Gatsby era of elegance. http://www.goldroomlive.com/ 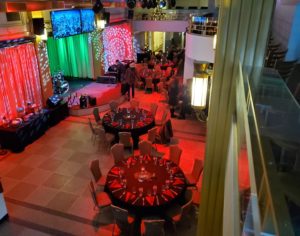 Got Questions about Coronation 46? Email to emperor44@ucppe.org

or just fill out the following form: