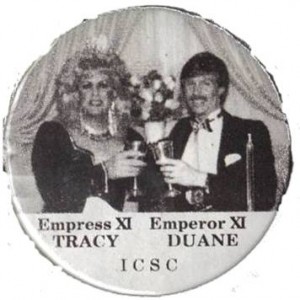 During the course of the past eleven years many proclamation have been handed down by past Monarchs that require future Monarchs to fulfill requirements pertaining to scheduling a particular function or event. Over the course of time, new Monarchs must fulfill the obligations imposed upon them by past reigns and thus have very little time to express and promote their own ideas during the course of their reign. Therefore, it has been proclamated by the power invested in me, that no future proclamations may impose or schedule specific functions or events upon future reigns, thus allowing future Monarchs the freedom to promote their own ideas within their realm.

Let it be said,

Let it be written,

By the power invested in me,

LET IT BE KNOWN THROUGHOUT THE EMPIRE OF SOUTHERN COLORADO

therefore: I, EMPEROR OF THE ELEVENTH REIGN, PROCLAIM THAT AT THE TIME THE P.R.’S ARE APPOINTED, THEY WILL GIVE OUT ONE EACH, A SUB-LINE TITLE. THAT TITLE BEING A CROWN PRINCE AND CROWN PRINCESS TO THE P.R.’S.

the purpose: TO ASSIST THE P.R.’S WITH DUTIES AND FUNCTION THROUGH OUT THEIR REIGN. PRIMARILY HELP WITH THE PLANNING AND PRODUCTION OF THE P.R. BALL, THUS BEING THEIR ATTENDANTS.

termination: THE CROWN PRINCE AND CROWN PRINCESS’S LENGTH OF REIGN WILL BE THAT OF THEIR P.R.’S. THEY MAY BE REMOVED AND REPLACE AS SEE FIT BY THE REIGNING P.R.’S. IF EITHER P.R. IS REMOVED, SO SHALL BE THEIR CROWN PRINCE OR CROWN PRINCESS. UNLESS THE NEW P.R. WISHES TO KEEP THEM OR THE EMPEROR AND EMPRESS HAVE ANOTHER PLACE FOR THEM.

protocol: THE POSITION OF CROWN PRINCE AND CROWN PRINCESS TO THE P.R.’S WILL BE PLACED UNDER THAT OF THE LINE OF SUCCESSION OF THE EMPEROR AND EMPRESS.

Let it be said,

Let it be written,

By the power invested in me,

Let it be known, that from this day forward, that the rules and regulations governing the campaign and the candidates competing for the positions of Board of Advisors Member at Large, and Emperor and Empress, and the inforcement [sic] of such rules and regulations, shall be the responsibility of the Council of Regents.

So it be said,

By the powers invested in me,

The position of Emperor and Empress being an elected positions by the Community, is one that should be earned as well as elected. Therefore, one is not truly an Emperor or Empress until they step down showing they have served the community. Therefore, it has been proclamated by the power invested in me that no person elected to either position that does not fulfill their required term or office shall be allowed to retain the title elected to them, thus being elected Emperor or Empress.

The time required for completing their term as stated in the By-Laws being that of the following Coronation, in which they will step down in full honor.

So it be said,

By the powers invested in me,