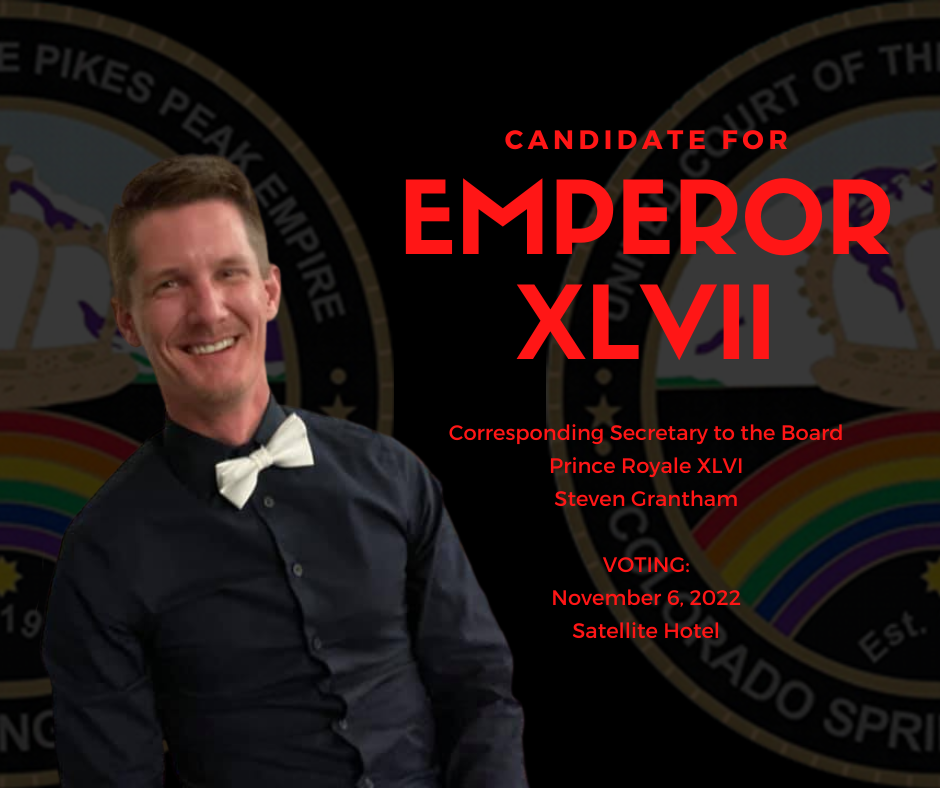 Giving back to the community has long been apart of Steven’s life. Starting in high school he was a part of a service club and over 4 years he logged over 1000 hours of community service. He attended the University of Central Florida and was an active member of the Men’s Rowing Club. During his time in the club, he organized numerous fundraisers for the club to help pay for new equipment and travel.

After working for a couple years after college, he became a United States Marine. He served in Okinawa, Japan as a motor transport operator. As a part of his duties, he organized logistical missions across South East Asia. He also mentored and counseled his Marines to develop them into leaders.

When his contract was up with the Marine Corps he moved to Colorado and was looking for some way to get involved and give back to his new community. The United Court of the Pikes Peak Empire was a perfect fit. Since joining the court, he has worked on organizing events, creating silent auctions and helping with day-to-day operations. As Prince Royal he has become even more involved and become an integral part in organizing events.

It’s a great honor to be a Candidate for Emperor 47 and Steven looks forward to continuing to serving the LGBTQ+ community of Southern Colorado. 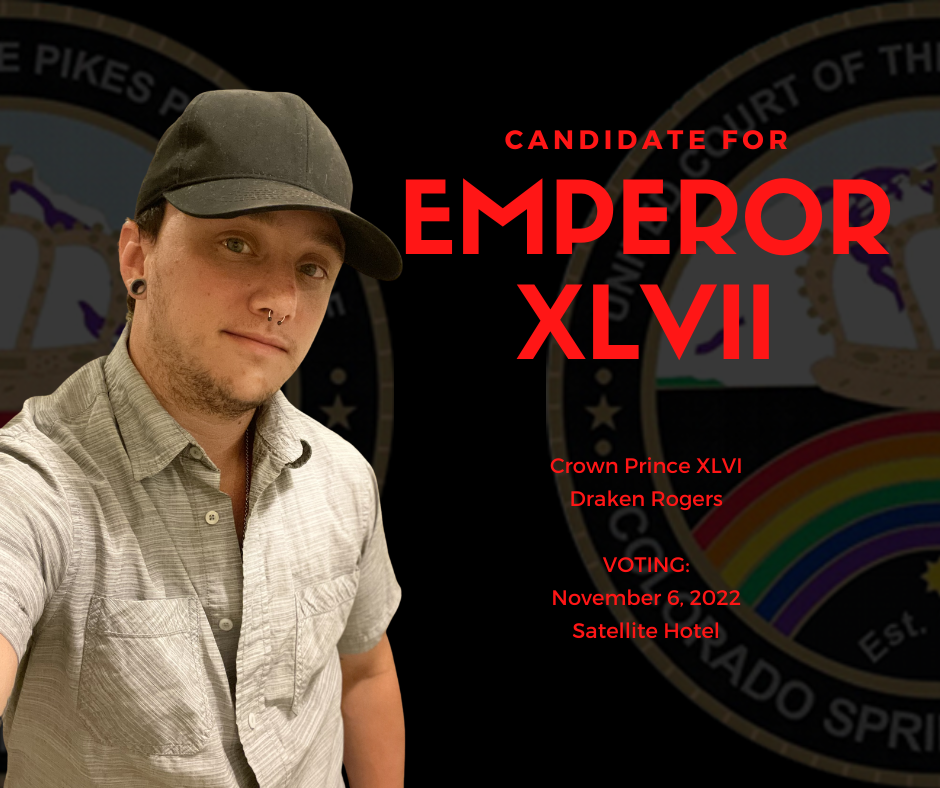 Hello to all! My name is Draken Rogers and I am a candidate for Emperor 47 of UCPPE.

Since moving to Colorado in 2017 for the Army, I have been living as a proud trans man. Performing and community events have been a constant part of my life since. In 2018 I was introduced to UCPPE helping with reign shows, auctions, state events, and travel. From then on I was officially invested as Grand Duke for Reign 44, 45, and am currently Crown Prince 46. In that time I’ve also held the titles of Mr Trans Colorado Springs, Mr Rocky Mountain Horror, and the Lead King Producer for a monthly all trans review show.

I’ve seen several iterations of success within UCPPE and wish to uphold that tradition while supporting even more new ideas! As an advocate for a sober lifestyle I hope to educate and entertain in spaces without alcohol and involve a huge part of our community that needs resources outside of a club scene. As an instrumental part of many state events, I also hope to bring back the grandness of state events with support from outside of our line. Many regents have seen me as a DJ, performer, and friend and I hope to include more of their talents in upcoming events. I firmly believe that I can bring a fresh perspective as a monarch for UCPPE and would love your vote for Emperor!

Keep an eye out for my upcoming campaign events on social media and in email. I’d love support and guidance as I navigate this campaign season. Thank you in advance for your consideration! 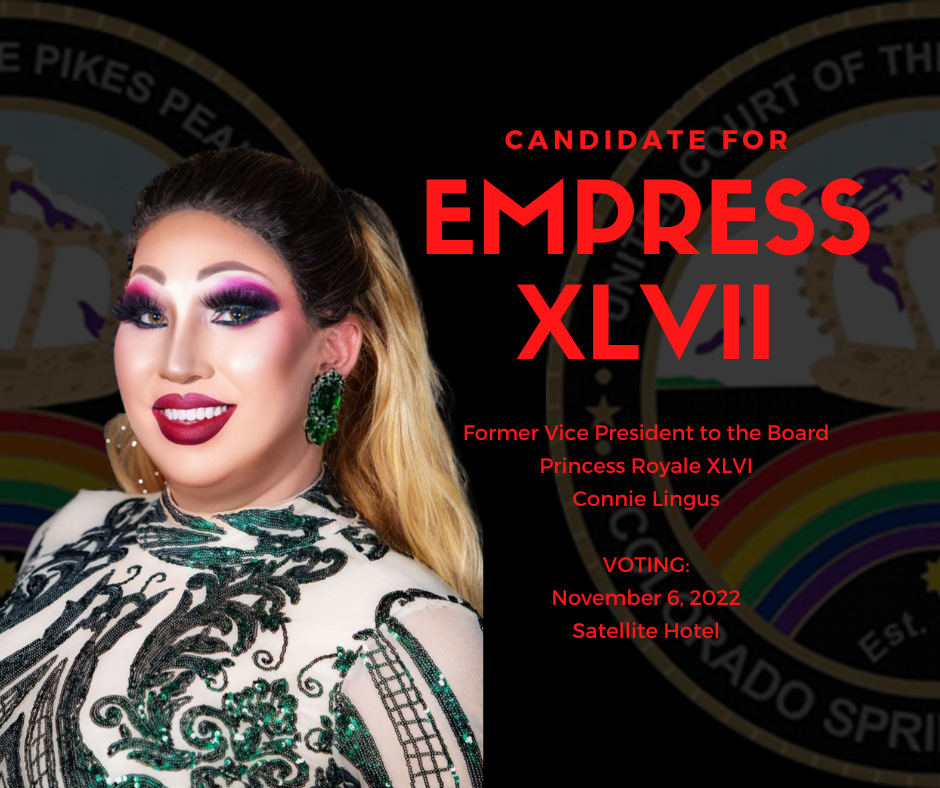 Connie Lingus started in the drag industry in May of 2018 in Pittsburgh, PA. Although she started drag in Pittsburgh, she is a Colorado native and graduated from Coronado High School in 1997. In 1999, she joined the US Navy, which took her to many unique destinations, including Guantanamo Bay, Cuba and Fallujah, Iraq.

Connie returned to Colorado Springs in August of 2019 and immediately continued her art form. In September of 2019, Connie was introduced to the Imperial Court System when she was asked to join the cast of Empress 44 and 45 Autumn Quinn’s Campaign Show. Immediately she was hooked. She continued to show support to UCPPE by performing and donating her art to multiple charity events leading up to Coronation 44. During Coronation 44, Connie participated in the set up and tear down of Coronation while also ensuring that anything the reigning Monarch needed was taken care of. During Investitures 44, Connie was asked and accepted a role on the Line of Succession as Vis-Countess 44. She then stepped into the role of Crown Princess 45 when the reign was extended during the COVID Pandemic. After Coronation 46, Connie was honored to receive the position of Princess Royal 46 and has stood beside Empress 46, Mesha Narie Fierce and has made herself available for anything her Majesty may have needed.

Connie not only has been proud to be an active member in the reign and organization , she is also extremely proud to have been a prior board member. In February of 2020, Connie was appointed Vice President to the UCPPE Board of Advisors. Although new to the organization, Connie took this role very seriously as she prides herself in being a staple in the LGBTQ+ community and believes with proper guidance, the community can only grow and prosper. During her time as Vice President, life in general happened and the President of the Board of Advisors had to step away. Connie agreed to step into the role of President while maintaining the role of Vice-President until an appropriate candidate came forward. Connie held the dual role of Vice President and President until August of 2021.

Connie is excited to be chosen as a Candidate for Empress 47 and is looking forward to campaigning and to continually raise money for charity and also raise awareness in our community and about this great organization. 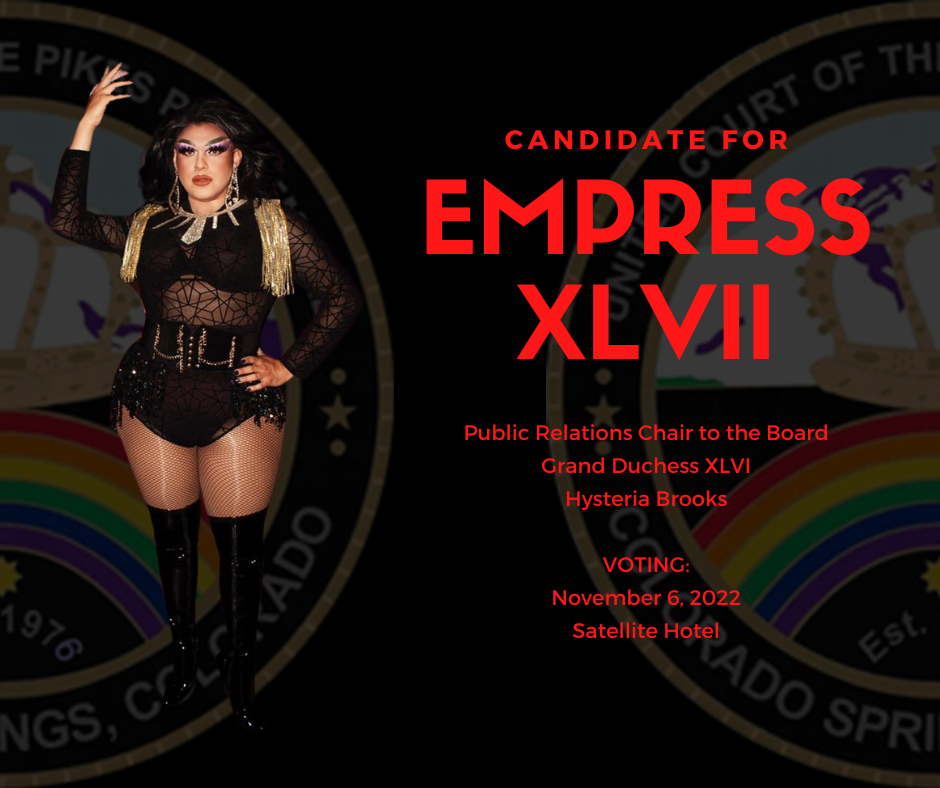 My name is Hysteria Brooks and I am running for Empress 47 of the United Court of Pikes Peak Empire! My goal and focus is to unite all of Southern Colorado to ensure the safety and continuation of our community as a whole. Along with producing and hosting my own successful shows, and as well as fulfilling my duties as Grand Duchess 46 & Public Relations Chairmen at Large, I have made time to work closely with other organizations to open pride in 2 new cities! As a Drag veteran and long time community advocate, I am proud to say that I have been apart of such beautiful events like these. It is with this ambition and trailblazing mindset that I plan to go to all corners of our realm, to ensure everyone has a place at our table. By holding events in different towns and city’s across Southern Colorado, I hope to foster a sense of community that people with little access to outside assets, can come and rest their heavy shoulders and know someone is looking out for them. Many places in Southern Colorado don’t know how much good this organization does, I want to be the one to change that. I want to extend a helping hand to those in need all across this great land, whether that be creating a safe space for them to breathe, a shoulder for them to rest a heavy mind on, or just being someone to understand their struggles. I believe I am the best candidate to take on such a task. Therefore I ask you for your vote to Build Back Better, Vote Hysteria Brooks for Empress 47. Thank you!