Update from the Board of Advisors 112019

Good Morning Fellow Courtiers,
On behalf of the Board of Advisers we bring you the following updates.
Empress 42 Antoniette Lilly:
·      For those of you who have not already heard it is with great sadness that we announce that Empress 42 Antoniette Lilly has passed away. Antoniette truly was the Golden heart of the peak and will be greatly missed. Her family has not announced funeral arrangements at this point but, we will update you as soon as we know more.
BOA office updates:
·      BOA President Resignation: On November 05, 2019 the BOA accepted the resignation of Emperor 34 Sean Gooden as President of the BOA. On behalf of the BOA we would like to express our gratitude for the many terms that Sean has served as BOA President and all of his contributions to UCPPE. Leaving the BOA was a personal decision for Sean and I hope that we can all respect his privacy and wish him well on all of his future endeavors. As there are 2 BOA meetings before the General Membership meeting where a new BOA president would have been elected. I will facilitate those meetings and act as BOA President until that date. Following the General Membership Meeting; I will finish the remaining year of my term as Vice President,
·      BOA vacancies: At the December BOA meeting the following positions will be filled. Corresponding secretary – by appointment of their Majesties. 1) Member at large seat – by appointment of the BOA. 1) Regent Co-Council Adviser – to be appointed by Empress 43. If you are interested in any of these positions please reach out to the me via email vicepresident@ucppe.org no later than 9:00 PM Friday December 13th.
General Membership Meeting:
·      Please mark yor calendars for the General Membership Meeting: Sunday February 16, 2019 Gold Room Noon to 4:00 PM voting Noon to 1:00 PM.
·      The positions of President and Treasurer are open for re-election.
·      Must be a dues paid member to vote, so please make sure that your dues are current or pay them at the door before voting.
ICRME Snow Ball:
·      On behalf of Reign 44 this is your call for protocol for ICRME Snow Ball 2019 “Waiting for Santa with the Empress”.
·      November 16, 2019. 6:00 PM at the Double Tree Denver Stapleton North, 4040 Quebec Street, Denver CO, 80216
Please reply to this email if you plan to attend and send all updates to protocol to vicepresident@ucppe.org
Yours in service to the community,
UCPPE BOA Vice President
Emperor 41 Water Xaris
Categories: Blognewsletter 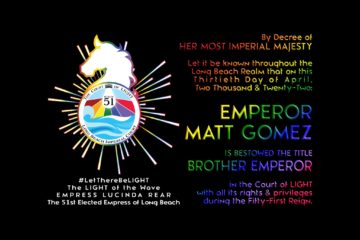 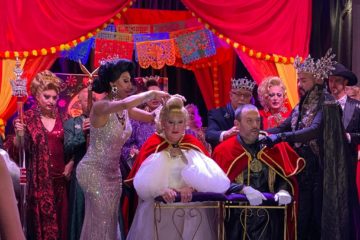 Congrats to Denver Court on Coronation 49

We send our congratulations to our mother court, Imperial Court of the Rocky Mountain Empire! Congrats to Dowager Empress Emetrius 48 Cierra Mota LeCher and Dowager Emperor Emeritus 48 Jio on your successful reign as Emperor and Empress. Congrats to the newly crowned monarchs, Empress 49 Jackie O and Regent Emperor 49 Alexander Sexton! We wish you nothing but luck to last the year through. If there is you need, please know that your daughter court is here to support you!

United Court of the Pikes Peak Empire Highest court in all the land! UCPPE Newsletter January 2022 Reign 46 Hello Friends, this issue will be brief and highlight events that are coming up on our Read more…